In preparation for local government elections in November, Elections New Brunswick is evaluating the accessibility of buildings it commonly rents as polling stations and returning offices during elections. A team of returning officers will travel the province this month, assessing the buildings and ranking them on various accessibility standards. In photo, Municipal Returning Officer Patti Nason counts and records the number of designated parking spaces for persons with a disability during a training exercise held in Fredericton on Tuesday.

Chief Electoral Officer Kim Poffenroth signs the writs for byelections on June 20 in the ridings of Miramichi Bay-Neguac and Southwest Miramichi-Bay du Vin. 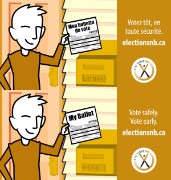 A campaign promoting the message to Vote Early and Vote Safely has been launched by Elections New Brunswick.

Ballots required for the Sept. 24 provincial general election are almost ready for shipping to the 49 electoral districts. More than 700,000 ballots have been printed to ensure there are more than enough ballots for every eligible elector in the province. There are also extras for voters who make a mistake and require a second ballot, and for many first-time electors who are expected to cast ballots at the 18 campus voting stations during this election.

Chief Electoral Officer Kim Poffenroth applied the Great Seal of New Brunswick to all 98 writs required to start the 39th provincial general election. With the official start of the election, all 49 returning offices, and one satellite returning office opened to the public today. The election will be held on Monday, Sept. 24.