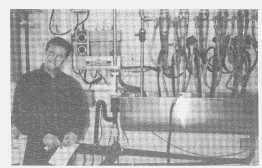 Milkhouse effluent can present a pollution problem if it is released without proper treatment to surface and/or ground water. The nature and the volume of the waste produced will vary depending on several factors; including cattle housing, type of milking system, etc. For example with milking parlours the volume of effluent to treat is usually greater than tie-stall pipelines, as water used to wash down the milking area is added to the equipment wash water. The effluent will contain the usual wash chemicals and milk residues from equipment washing but also manure solids from floor washing in parlour area. Regardless of milking system the major contaminants to deal with are the phosphorous and milk residues in the wash water, however nitrates in varying amounts are also present.
(Typical milkroom)

Phosphorous concentrations in milkhouse waste are often ten times higher than those found in household septic tank effluent and if discharged to surface water they can cause prolific growth of algae. When bacteria attempt to decompose this algae they require oxygen, thus depleting the dissolved oxygen found in the receiving water making it unfit to support fish life. Decomposing milk also require oxygen and some of the bacteria associated with this decomposing milk are known to transmit disease. Nitrates pose a problem for drinking wells if they are released to ground water.

Regardless of the disposal system chosen, it must be properly designed, installed and operated to be; economical, compatible with the current washwater and manure handling systems on farm, and be effective in preventing pollution.

(Installation of a tile field)

REDUCING WASTE TO BE TREATED

Perhaps the most obvious solution to correcting the problem of milkhouse effluent is to reduce the volume of water to be disposed of without sacrificing the cleanliness of the milking equipment. The size of the milkhouse sink used with pipeline systems has a direct influence on the volume of water required to clean the equipment. Enough water must remain in the sink to keep the inflation submerged during wash cycle to prevent the entry of air into the pipeline. A water conservation sink has been developed for use with pipeline systems that greatly reduces the volume of water required to keep the inflations submerged. This also has a cost benefit from reduced energy requirements as less hot water is required and a reduction in the volume of wash chemicals used.

Another practical method to reduce the volume of waste to be treated involves collecting the first rinse from the pipeline after milking and feeding it to calves.

If the farm is currently using a liquid manure handling system or plans to convert to such a system in the near future often the most economical way to deal with milkhouse effluent is to divert it to the manure storage. While it requires a larger manure storage to contain these extra liquids, they may prove beneficial in dilution of manure solids in storage making agitating and pumping easier.

Farms using solid or semi-solid manure handling systems have to handle milkhouse effluent as a separate waste and a variety of methods have been recommended; including constructing separate liquid storage tanks, modified septic systems, artificial wetlands and chemical treatment reactors.

Construction of separate liquid holding tanks or lagoons for milkhouse effluent has not been well received because of the cost of these systems and the need for liquid manure handling and spreading equipment to dispose of this waste.

Conventional septic fields have been used extensively in the past but these have either failed or achieved very limited success. Generally the milk fat and other solids destroy the system by eventually making their way into the treatment trenches and sealing the interface between the gravel and the soil. This reduces the soil permeability causing the system to operate very slowly or fail altogether. Whole milk should never intentionally be dumped into the system as it will cause the system to fail over time. Accidents will always happen, so to prevent whole milk from reaching the trenches it is recommended that a double compartment septic tank with proper baffles on the inlet and outlet pipes and a storage capacity for several days milkhouse effluent be installed. Allowing the milk several days residence in the tank will allow most of the milk fats to separate and form a layer at the top of the tank which must be periodically cleaned. These systems should only be recommended in very well drained soil types.

Research and experience have shown that some modifications to the conventional systems will greatly improve their reliability and useful life especially in poorly drained soils or soils having a high water table. A modification to enhance the system is to construct the trenches in such a manner as to promote aerobic conditions to exist for period of time between subsequent milkings. This will allow microbial activity to oxidize some of these materials and thus prevent trench sealing. A peat/gravel layered bed system is recommended and such a system was constructed in New Brunswick to evaluate this technology. To date the results have been better than expected and the system has been very effective in treating the waste. As with other milkhouse waste treatment systems the amount of whole milk entering the system should be minimized. The effect of whole milk on this type of system was observed following an accidental release of a tank of milk into the system. This greatly reduced the system's treatment efficiency for a period of time but the system has recovered to satisfactory performance levels due most likely to the microbial activity.

The use of Artificial wetlands is a relatively new technology that has been proposed to deal with milkhouse effluent and barnyard runoff. Basically a designed network of deep and shallow pools containing select aquatic plant species remove the nutrients from the waste stream. The effectiveness of such a system during the winter months when the biological activity is reduced, has been questioned and due to a lack of technical data these questions will remain unanswered for some time.

Another innovative new technology recently introduced to New Brunswick involves the use of chemical treatment reactors or flocculators to remove the majority of phosphates and suspended solids from the milkhouse effluent. The effluent is transferred from the milkhouse to a reactor and a proportionate amount of hydrated lime is added to the reactor. The mixture is allowed to settle undisturbed for two hours then the clarified liquid is discharged to a tile field while the sludge is sent to the manure storage. This technology is relatively new and its' efficiency for treating the milkhouse waste requires more evaluation.

Should you wish more detailed information about any of the above mentioned systems for dealing with milkhouse effluent please contact your regional N.B. Agriculture office.