Finance and Treasury Board

Finance and Treasury Board
News
Government of New Brunswick

SAINT JOHN (GNB) – Saint John today received federal designation as a Foreign Trade Zone Point, which allows companies to import goods, assemble and store them and re-export them without taxes or duties.

“This initiative will simplify trade and duty matters for New Brunswick businesses in this challenging climate,” said Energy and Resource Development Minister Rick Doucet. “Our government is pleased to support the promotion of the Foreign Trade Zone designation for Saint John, which will be a great resource to businesses of all sizes.”

Doucet spoke on behalf of Treasury Board President Roger Melanson, who is also minister responsible for Trade Policy.

The designation recognizes the Saint John region as a hub for international trade.

“This is just one more advantage we now have to promote our region,” said Ron Gaudet, chief executive officer for Enterprise Saint John. “This Foreign Trade Zone Point designation has many benefits including allowing companies to import goods, assemble and store them and re-export them without taxes or duties. That’s a huge advantage for our manufacturing companies and businesses.”

Enterprise Saint John, as the regional economic development agency, has worked towards achieving the designation for the past two years.

“This Foreign Trade Zone Point could have long-term benefits for business and the growth of this city for years to come,” said Saint John Mayor Don Darling. “It means less hoops to jump through, less paper work, tax and tariff burdens for business. If they grow, our city grows. I am pleased we have yet another advantage we can promote and tell the world Saint John is the ideal place to do business.” 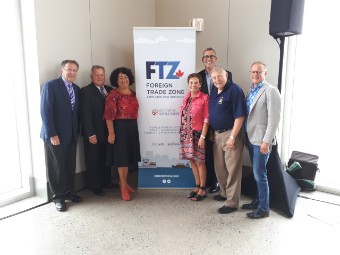