GRAND BAY-WESTFIELD (GNB) – Brenda Murphy was sworn in this evening as the 32nd lieutenant-governor of New Brunswick in Grand Bay-Westfield.

To allow for immediate commencement of duties, the new lieutenant-governor will assume office immediately. A formal installation ceremony will be held at a later date at the legislative assembly.

“Today is an important day in our province. I am confident that Ms. Murphy will be outstanding in this new role and I look forward to working with her,” said Premier Blaine Higgs. “Ms. Murphy has made tremendous contributions to this province and its people through her work aimed at ending poverty and family violence, and advancing women’s equality and will continue to do so as the lieutenant-governor of New Brunswick.”

Murphy will replace Jocelyne Roy Vienneau, who passed away on Aug. 2, following a courageous battle with cancer.

Brenda Murphy is the former executive director of the Saint John Women’s Empowerment Network, an organization she led for more than 20 years.

Murphy served three terms as a municipal councillor for the Town of Grand Bay-Westfield. She has volunteered with a variety of organizations, including the Hestia House shelter for women, the Saint John Legal Centre, the Coverdale Centre for Women, and the Economic and Social Inclusion Corporation of New Brunswick.

Murphy lives in Grand Bay-Westfield with her partner Linda Boyle. 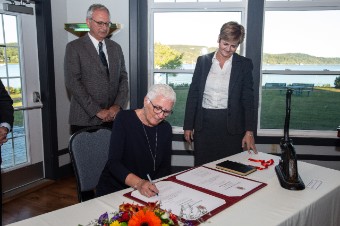